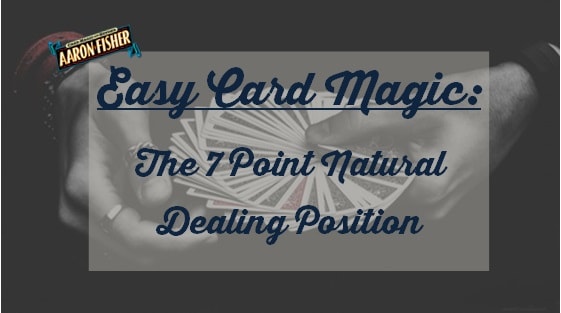 In fact, at least 80% of clients I work with discover, during our first meeting, that by making a few simple adjustments to their normal dealing position….

They can make drastic improvement in the success and ease of every sleight they pick up!

As you’ll see in this video, there are no sleights involved here. But the way you hold the cards when nothing is happening actually dictates your success or failure with any sleight. Fans of my popular blog post called “How to Do Easy Card Tricks” already know the importance of holding the deck correctly.  These 7 points will help you understand this even better.

Each one of the 7 points gets you closer to easy card magic – makes your sleights easier to use successfully – and at the same time – eliminates suspicion before it ever arises. And that’s one of the major keys to performing card magic that not only fools your audience, but amazes them.

This video is only ten minutes – and if you want to perform amazing card tricks, you should make sure to watch it. And if you’re an experienced card magician already, it’s safe to say you’ll find some very useful information here you won’t want to miss. As you practice, keep these tips in mind. Enjoy!

Now that you have the 7 Point Natural Dealing Position, you may find it helpful to see how each point can make or break the success or failure of the most important sleights in any card magician’s toolbox. 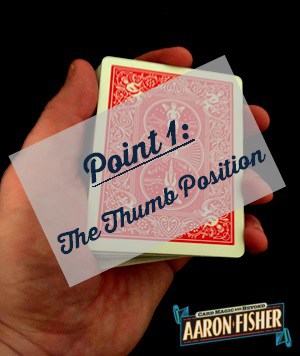 Passes and Half Passes

It’s almost impossible to neatly square the deck in a single motion unless your thumb is in this position. That means sleights like the Classic Pass, the Gravity Half Pass or countless other sleights won’t be possible – because your thumb won’t be there to square the pack for the move.

The Double Lift and Turnover

The position of the thumb allows you to square the cards perfectly and easily. If you’re thumb floats up, you won’t have any way to square the double card before the switch. So if your thumb isn’t normally in the position shown in the video..BINGO.

You’ve just discovered a big clue that make make your double lifts seem like you really only have one card. We are getting closer to easy card magic… 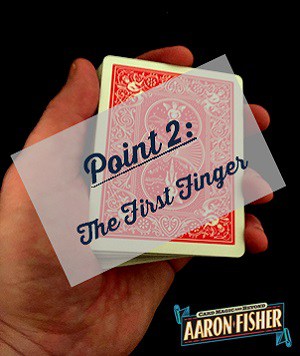 Keep it in front of the tip – above the top edge of the pack! Many of my students find this challenging. After a few weeks, I notice the finger has dropped a bit and is no longer in contact with the front edge of the deck.

It doesn’t matter whether you want to do a simple two card push off or a more Advanced Robert Houdin Break (the choice of most Top Masters for almost a century), this position keeps the double card aligned at the front of the deck. This is especially crucial when you’re first mastering these all-important techniques.

That means you won’t be able to perform the Spread Cull, which allows you to secretly control any cards you want as you spread through the pack, because you simply won’t be able to push them off the deck straight.

If they involve the spread, you’ll have trouble, because without the first finger rising above the front of the deck – the pack won’t be squared and ‘ready to go’ as your hands come together and close the spread.

The Pass, Gravity Half Pass and Hermann Turnover Pass

Virtually all experts, starting with Dai Vernon himself, find the first finger position invaluable if you want to perform a pass without anyone seeing your fingers move. As the right hand takes the pack to do any one of these moves, keep the left first finger still by pressing it against the back of the right second finger. This key touch was first shared by Dai Vernon himself, and it’s VERY important.

Keeping the second, third and fourth fingertips just barely above the right side of the deck is the most important thing to focus on immediately. Rehearse this…get this one right… and your card magic will start to progress immediately. Without these fingers in the correct positions, you’ll have trouble with:

With your fingers sticking up like bananas over the right side of the pack, you won’t be able to deal a card, or even push one off the deck.

This is the same problem we just mentioned, but multiplied. The correct finger positions ensure that your second, third and fourth fingers don’t stop cards coming off the deck when you spread the cards between your hands.

So, quite literally, you need these exact positions in order to have someone pick a card!

Most important, you’ll never be able to hold a left fourth finger break without these points. If the fingers stick up, the moment your pinky moves to hold a break (near the top, bottom or middle of the deck doesn’t matter) – your pinky will seem to vanish! Great Trick?

Yes – it’s awesome to make your finger disappear :), but it will KILL your card trick. The positions in our 7 Points ensure the deck looks the same whether you’re holding a break or not…and that’s a big piece of the puzzle. Now, we are getting even closer to easy card magic… 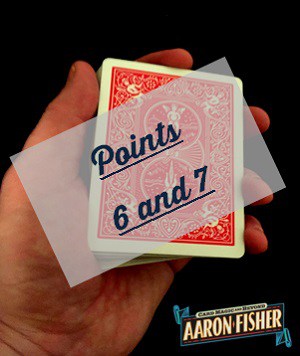 The “down and to the right” slant to the deck makes all of your magic more effective.

Puts tension in your hand and draws audience focus to your hand – even when you aren’t doing anything sneaky. The relaxed position of the 7 Point Natural Dealing Position uses no tension, and allows you to connect with the audience.

Bring the deck parallel to the table or floor only when you want the audience to focus on the cards!

The down and rightward position of the deck facilitates each and every move you do – because it show you how to hold the cards in ‘neutral’. In this position, the cards rest in a bracket created by the first and second finger.

This is much different than in a standard ‘dealing grip’ where the cards are parallel to the floor. In this case, it’s almost impossible to avoid putting pressure on the cards with your left thumb or fingers. That pressure isn’t helpful to any of your handling – from spreading the cards to secret moves.

When you take all the pressure off the cards by using the 7 Point Natural Dealing Position, you create a ‘blank canvas’. Now, every finger position you use and every move you make won’t be impeded by pressure you’re placing on the cards without even knowing it.

For this one reason alone, I suggest you try out the 7 Point Natural Dealing Position. Starting from this new ‘blank canvas’, you’ll discover many sleight you thought were difficult may immediately become easier. And that’s something every magician loves!

Now we need your help! Let me  – and your fellow readers – know which tips you found the most helpful. I’d also love to read YOUR performance tips – after all, there are many paths to great magic, and we want to explore them all! I can’t wait to read each and ever comment you post!